Waste is an inevitable by-product that arises from the phenomena of life, growth, change of lifestyle of societies, and different kinds of industries. It is also considered as one of the major sources of environmental degradation since it causes air, land and water pollution contributing towards global warming. According to the local government report, it has become a crucial issue to be solved. The waste generated in Malaysia amounted to 38,200 tons/day and only 5 percent of it is recycled. It is expected about 45,900 tons/day of waste including household and commercial waste to be generated by more than 30 million Malaysians in the year 2020 making the situation worst (Global recycling magazine, 2017).

The agricultural industry plays a significant role in the overall economic growth of any nation in the world. Malaysia produces at least 168 million tonnes of biomass, including timber and oil palm waste, rice husks, coconut trunk fibres, municipal waste and sugarcane waste annually. This puts the country in a good position to promote the use of biomass as a source of wealth. It is estimated that 15% of the total waste generated in Asia is agrowaste, with agricultural waste generation in Malaysia at approximately 0.122 (kg/cap/day) in 2009 which is projected to reach 0.210 (kg/cap/day) by 2025 (Agamuthu, 2009). Unfortunately, on an average, 1.2 million tonnes of agricultural waste is disposed of into landfills annually (Agamuthu, 2009). The Malaysian government has projected to reduce the waste disposed of in landfills to 40 percent through 22 percent recycling and 80 percent intermediate treatment such as waste-to-energy, composting and material recovery by the year 2020.

Among the various agricultural waste, with more than five million hectares of land under oil palm plantation, oil palm waste, by far, constitutes the largest share of agro waste. Previously, the millions of tonnes of biomass palm residues – empty fruit bunches and fibres, trunk and fronds have been utilized as fuel to generate steam at the mills (Ma et al. 1993). The ash with a potassium content of about 30% was used as fertilizer (Lim, 2000) but are otherwise allowed to decay naturally in fields, discarded or burnt, which harm the environment as they release the greenhouse gas methane.

Due to environmental concerns practice of land clearing by the clean burn method has been substituted by the zero-burning in the Malaysian oil palm plantation since 1993. Zero burning practices contribute to nutrient recycling, soil improvement, faster plantation establishment and lower costs (Hashim et al., 1993). Despite of these benefits, disposal and management of oil palm biomass is a huge challenge under the zero-burning policy. The cost of removing old stand is expensive, and this practice is not feasible for independent estates and oil palm small holders, particularly those who cultivate oil palms on hills or deep peat soils. Normally, the old and diseased oil palm stands were felled, chipped or pulverised and evenly distributed between the planting rows for natural degradation. Nevertheless, this unattended biomass (chipped oil palm trunk and root mass) requires approximately two years for complete degradation due to its high lignin and polysaccharides content (Murai et al., 2009). In addition, the biomass becomes a medium for the breeding of pests such as the rhinoceros beetle (Oryctes rhinoceros) and pathogens like Ganoderma, which becomes a sources of inoculum for basal stem rot (BSR) infection in the healthy palms at replanting. Therefore, these materials must be treated or reused if their environmental impact is to be reduced, enabling at the same time some of their primary components to be recovered as value added products such as compost and biofertilizers.

Composting as a method for preparing organic fertilizers and amendments is economically and ecologically sound and may well represent an acceptable solution for disposing of these by-products, and increasing value. Generally, composting is the process of controlled biological maturity of organic waste under aerobic conditions (Fig 1)., where organic matter of animal or vegetal origin is decomposed to materials with shorter molecular chains. The process is mediated by different micro-organisms actuating in aerobic environment: bacteria, fungi, actinomycetes, and protozoa, which participate naturally in the organic biomass or are added artificially (Tuomela et al., 2000). The process can be described by the following equation: 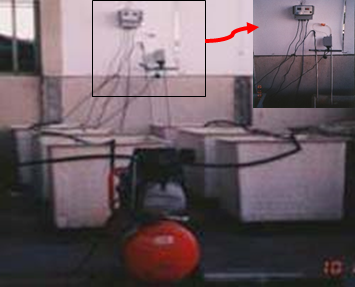 The organic matter produced after composting is more stable, hygienic, humus rich, and can be beneficially added to soil to supply nutrient such as N, P, K and essential micronutrients to crops. The physiochemical and nutritional properties of EFB modified after composting is as tabulated (Table 1). In addition, soil properties, such as texture and water holding capacity, which favour plant growth and increase drought tolerance of crops, can be also be improved (Siddiqui, 2006; Siddiqui et al., 2008; Jakobsen et al. 1995).

Table 1. Changes in accumulation of nutrients and heavy metals and some physiochemical properties of EFB supplemented with chicken manure during composting.

Traditional composting method to degrade agro waste may be time consuming however, it can be altered by the intervention of microbes. More recently, possibility of utilizing white-rot fungi to increase the rate at which oil palm generated waste is degraded has been tested by Naidu et al., (2015). White-rot fungi are known to degrade wood components due to the production of hydrolytic (cellulases, xylanases and amylases) and oxidative (laccase, manganese peroxidase and lignin peroxidase) extracellular enzymes. The study demonstrated the biodegradation pattern in healthy and diseased oil palm trunk by the utilizing Pycoporus sanguineus FBR and Gramathole fuligo (strains ST2, PTG 12 and PTG 13) in vitro. It was revealed that P. sanguineus FBR established faster and was early colonizer of wood blocks than G. fuligo strains. However, the rate of degradation in terms of mass loss was high in G. fuligo ST2 treated wood blocks (Naidu et al., 2017). The mass loss varied according to the substrate utilized by the individual strains and production of hydrolytic and oxidative enzymes. Secretion of both enzymes during the end of the decay period was deliberately high in the diseased blocks degraded by P. sanguineus FBR than the other three strains. It was further elucidated that most of the hydrolytic enzymes are produced by G. fuligo strain with low secretion of the oxidative enzymes. Thus, indicating their importance on degradation of oil palm wood polysaccharides, with minimal attack on the lignin. Whereas, P. sanguineus FBR preferentially degraded lignin components in the wood tissues than G. fuligo ST2 (Fig. 2). The results suggested that wood degradation process could be enhanced by microbial treatment and to achieve the high and faster rate of degradation a combination of WRF strains should be tested owing to their substrate speciﬁcity and nature of degradation.

The composting of agricultural and other waste materials is an environmental gain as these wastes would maybe dumped or burned, causing air and water pollution and creating waste disposal problems. Though the techniques mentioned above are advantageous and mitigate in converting the oil palm generated and other agricultural waste into wealth, it is not commonly practiced by growers in Malaysia, perhaps due to lack of knowledge and awareness. Plantation and farm owners must be educated on practicing techniques on faster degradation of farm and plantation generated waste into compost/ organic fertilizer and the benefits of utilizing these to reduce the consumption of inorganic fertilizers, which may be harmful to the health of farmers and to the farm environment in general. The implementation of such research findings in the field may be beneficial to farmers, and to local environment quality. A fitting and well-utilised agricultural waste management strategy would be ideal for a country like Malaysia-in the sense that the economic, environmental and technological advantages would complement the nation’s drive towards becoming a more robust participant in global agricultural trade.