By : Siti Nor Akmar Abdullah

Climate change that is affecting rainfall patterns and earth temperature is worsening in recent years. Abiotic stress caused by climate change is a major limiting environmental factor affecting the yield of most crops.  Abiotic stresses like drought, high temperature and salinity cause disruption in water status consequently leading to detrimental effect on the plants. Excessive production of reactive oxygen species (ROS) that are highly reactive and toxic under various stress conditions can destroy proteins, lipids, carbohydrates and DNA and interfere with biochemical processes in the plants which ultimately results in oxidative stress.

Oil palm productivity is significantly affected by climate change effects resulting in extreme whether condition including prolong drought period (El Nino) and flood. The El Nino weather pattern in 2015 until early 2016 in Southeast Asia caused significant palm oil yield losses due to adverse impact on reproductive processes. These include lower female flowering rates and reduced fresh fruit bunch (FFB) size and weight. The oil palm FFB yield in the peninsular Malaysia and Sabah (in East Malaysia) decreased by about 20% due to the 1997 to 1998 El Nino where rainfall of less than 100 mm for more than two months can greatly affect the yield. Abiotic stress may affect fruit development and postharvest quality of oil palm fruits and this is of importance in terms of economic value to the industry.

Oil palm grown in regions where drought occurs for two to four months, there is a possibility of large fluctuations in yield. Fresh fruit production could also be reduced from 20% to 30% in a prolonged drought while a combination of water depravity of 50 mm and temperature increment of 1°C decreases the production at an average of 2.15 tonnes/ha/year accounting about 40% of the average yield. The rainfall patterns also can affect the oil palm yield after 6 to 7 months.  An average monthly temperature for 8 months of less than 27.83°C before harvesting led to low yield of less than 1.25 tonnes /ha/month all across Malaysia. Abiotic stresses trigger local and long distant signals which are then synchronized and incorporated into the whole plant process so that the plant can respond and survive. Abiotic stress response involves crosstalk with energy signaling pathways where autophagy plays an important role. Autophagy destroys specific compounds essential for efficient growth but require major energy input. Consequently, biological processes that protect plants from the stress conditions are stimulated.

Abiotic stress and its symptoms in oil palm 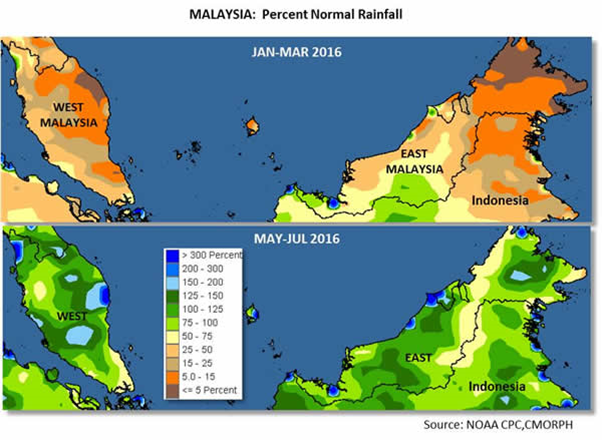